Too Many Kisses (1925) was an eye opener for me. Richard Dix is an actor I have always felt played a bit stiff, an actor fully matching his rugged, stalwart look. He was a big star for Paramount in the 1920’s in such films as the good and less interesting brother in Cecil B. DeMille’s 1923 epic The Ten Commandments and in The Vanishing American (1925) and Redskin (1929). Dix went on to transition to talkies and in 1931 starring in Cimarron with Irene Dunne he won a nomination for Best Actor and the film was voted Best Picture. Not too shabby. His later career best remembered for the mystery series of Whistler films. Dix’s career began in 1917 with his final credit in 1947. Granted, I can count on one hand the number of silent films with Dix I have seen, perhaps I’ve been selling him short. In this case, I think so, he’s delightful fun and looks like he is having a ball.

In Too Many Kisses he shows off a side I’d not seen before, Richard Gaylord, Jr., the charming, girl chasing, son of an industrial kingpin more interested in girls than the family business. His father Richard Gaylord, Sr. (Frank Currier, best known as Arrius in the 1925 version of Ben-Hur) exasperated buying off a seemingly endless number of ex-girlfriends for breach of promise (40k in 1925 was an awful lot of cash). Junior promises to stay away from girls and dad sends the young lothario to the Basque region of France/Spain to secure the rights to a mineral that can only be found there in abundance. Sent along with the son to keep him honest is Mr. Simmons (Joseph Burke). They arrive in the sleepy village, literally it is siesta time. Not soon after arriving does Richard see the beautiful Yvonne Huerta (Frances Howard, soon to become Mrs. Samuel Goldwyn) and his rival for her affections Don Julio (William Powell). Richard is eager to make moves on the lovely Yvonne and Don Julio is eager to do away with his rival by any means possible. That’s all I am going to reveal so as to not spoiler too much.

One of the joys of the film is spotting Harpo Marx in his first film role. It’s not a large part, he can be seen in many shots as the village Peter Pan (aka local idiot). Nonetheless, to a modern viewer, you cannot help but look for Harpo in every instance he is on screen. Already he was a scene stealer and got in a few bits of business. In a few short years he and his equally famous brothers would be creating comedic mayhem in a slew of successful films for the next several decades.

The other joy is seeing William Powell playing one of his numerous bad guys, which was his lot in the silent era. Be it western, costume or modern film, Powell was typed as a baddie. Unlike the urbane, witty, romantic he would transform into once sound came in. Don Julio is a thankless role, and Powell adds some charm and humor in the scenes as he serenades Yvonne (and unknowingly Richard).

Filmed at Paramount’s Astoria Studios in Long Island the film utilized sets that were still standing from Rudolph Valentino’s final film for Paramount A Sainted Devil 1924 which was a flop at the time and now a lost film. 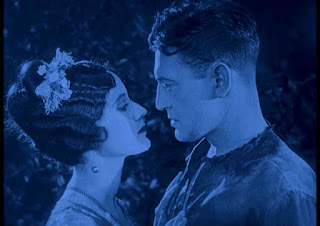 The restoration on the film is dazzling. The source print is a 16mm reduction print of the original 35mm. This is one of many fine examples to show someone who thinks silent films were somehow primitive, jerky affairs prior to the coming of sound. Just how one might think that overnight the coming of sound would improve picture quality is something that has always baffled me as an argument. The image quality here is stunning and the tints used are correctly mirroring what was commonly done at the time, blue for night scenes, sepia for interiors. The film is light, good fun with some action and I found myself smiling throughout. I would be remiss in not mentioning that the score for the film is composed and performed by Bill Marx, Harpo’s son. The underscoring moves the film right along and it’s a bit of geeky pleasure knowing he is actually playing the score on Harpo’s Steinway. It's done with love and it shows. 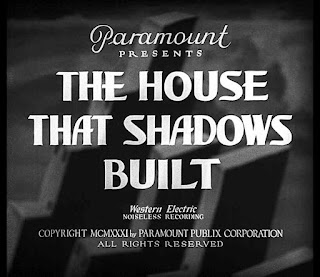 This is not all we are treated to with this Blu-ray release, it is chockablock with extras. The first being a beautiful print of the 1930 publicity film The House That Shadows Built. This film made to celebrate the first 20 years of Paramount Pictures was created for and shown during the 1931 edition of the annual Paramount Week. This film featuring a footage of large number of stars from silent era to sound films. This included a rare bit of Marx Brothers sketch “The Theatrical Manager’s Office.”

The other and most exciting bonus is a beautifully restored 1910 Biograph film A Child’s Impulse directed by D.W. Griffith. Film Preservation Society* was created to preserve, restore and make available the 460 Biograph films directed by D.W. Griffith between 1908 and 1912. A Child’s Impulse is the 237th film in that list. The score was composed and performed by Donald Sosin. The story of this particular film is engaging and is told by FPS Founder and President Tracey Goessel in the lavish booklet that accompanies this disc. Back to the film, it stars a lovely Mary Pickford well on her way to being THE star of the silent era. The print is absolutely stunning and if this is what awaits in further restorations for the Biograph Project, well it is going to be an amazing thing.

Have I mentioned the booklet?

The Blu-ray release features a reversable cover art and a 16-page full color, glossy booklet with essays by Marx Brother’s expert Robert Bader on Harpo Marx and the film Too Many Kisses and The House That Shadows Built, Richard Dix by preservationist, filmmaker, and historian Kevin Brownlow, William Powell by Powell expert and collector, D. Christian Anderson, and The Biograph Project by Tracey Goessel. A lot of thought and care went into the Blu-ray release and it shows. You can order this bluray directly from Film Preservation Society. All profits from the sales will be used for restoration of films for the Biograph Project. To learn more about The Biograph Project, please visit the FPS website and also follow the Facebook page.

*In the interest of full disclosure, I am Secretary for this Non-Profit Organization. Nonetheless, I purchased a copy of the Blu-ray for the pleasure of seeing it, supporting FPS and writing a review. No hands were tied nor blackmail threatened, my views are my own.

This is a perfect gift for the cinema fan in your household, I recommend this without reservations. 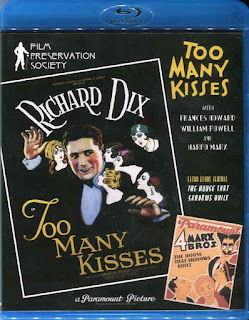 I am giving away a sealed copy of this Blu-ray Too Many Kisses.

Rules: You must live in the US to participate. That’s it.

To Enter: Send an email with the subject line Too Many Kisses to rudyfan1926 (at) gmail (dot) com and provide your real name in the body (no twitter handles please) and I will draw the winning name by December 15th.