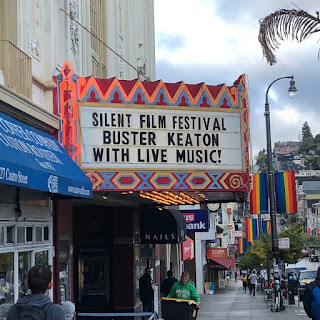 During a wintery storm this weekend we were safe, not exactly warm, in the Castro Theater for the annual Day of Silents winter event. The theater’s heating system seemed on the blink, but, being forewarned I was forearmed. My wool shawl kept me snug as a bug in a rug up in the balcony. 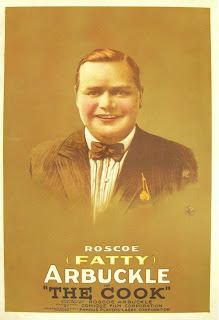 The five-program event was chockablock with good stuff.  We started off with three shorts featuring Roscoe Arbuckle and Buster Keaton. Each was accompanied by Donald Sosin on the piano (electric keyboard and some other instruments) with hilarious effect. The Cook was the first film and never ceases to make me howl with laughter. Night Nurse and The Garage were both new to me. I thoroughly enjoyed all three films. Night Nurse featured a bit with Arbuckle in drag which was a hoot as both he and Buster flirt with one another. All three films were restorations courtesy of Lobster Films. 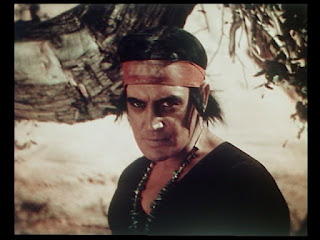 Redskin is a film I have had sitting on the shelf in the NFPF DVD set Treasures III: Social Issues in American Film.  I just never got around to checking it out.  Too many in the to-be-watched pile of DVDs. Seeing this film on the big screen is really the way to see and appreciate it. Unique because the film was much more sympathetic to the Native Americans as has been typical of Hollywood both before and after this film. Beautifully filmed in the two-color Technicolor process this was a lovely thing to behold.  The sequences which took place on the Indian land were shot in Technicolor, the school and college sequences were in black and white. While the actual story was, for the most part, slight it was still a most enjoyable film.  Musical accompaniment by The Mont-Alto Motion Picture Orchestra was terrific. Very glad I’ve seen it and will likely watch it again here at home. 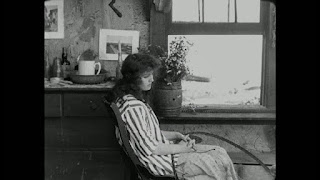 Woman with a Movie Camera took a look at several directed by Alice Guy-Blache.  She’s a bit of the “it girl” of the moment being the subject of a recent documentary. She is also featured on the KINO DVD set Pioneers: First Women Filmmakers.  The first 5 short films were from when Alice Guy-Blache worked for Gaumont from 1901, 1904, 1906 and 1907. In the first film we get to see Alice Guy herself, in drag, playing the husband of the wife shopping for a newborn among the cabbage patch fairies. La Glu was a humorous look at a little boy who steals a pot of glue and causes mayhem before being stuck himself. The Ocean Waif was a more feature length film from Guy-Blache’s American film company Solax and starred the young Doris Kenyon and Carlisle Blackwell.  Kenyon was utterly charming as the waif. Donald Sosin was back providing all the music for the films, what can I say, he’s marvelous. 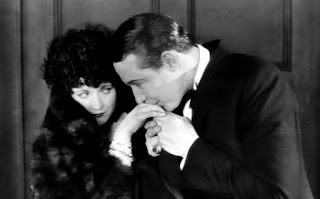 My last film of the day was a sparkling film by Ernst Lubitsch The Marriage Circle starring Florence Vidor, Monte Blue, Marie Prevost and Adolphe Menjou. It was the perfect film to end my day of silents.  Frothy satire on the joys and perils of marriage.  This was my third film this year with Florence Vidor and I have become quite the fan.  Monte Blue was hilarious as the husband who is seduced by the very naughty Marie Prevost.  Adolphe Menjou is a somewhat smaller role as Prevost’s suffering husband who is looking for evidence to enable him to file for a speedy divorce. Creighton Hale is Monte Blue’s partner who suffers with unrequited love for Monte’s wife Florence. Everything works out in the end.  This film bore some resemblance to the other Florence Vidor film from last spring Husbands and Lovers.  Mont-Alto Motion Picture Orchestra provided the jaunty, frothy music that lifted this film up to one of sheer delight.


I skipped the final program with some regret.  It was the 1925 Phantom of the Opera starring Lon Chaney.  I had a charity bake sale to attend to on the coming Monday and, yes, I was a little tired after a satisfying full day of wonderful films.  So I bugged out and made note of the glorious hint of what will be coming next spring!  I'm guessing Foolish Wives with Erich von Stroheim! Save the date, I will be there! 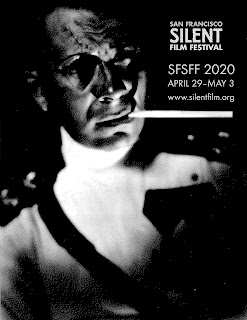