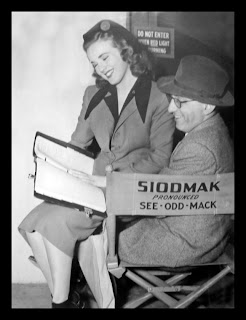 
Yesterday it was annouced that 1930's and 40's songstress Deanna Durbin had passed away in France at the ripe age of 91 recently.  Durbin, much like Garbo, retired from films in the late 1940s with nary a look backward.  Her third marriage was by all accounts a happy one in which her husband promised to protect her from journalists and she promised to protect him from dragons.  Apparently they both kept those promises without fail.  Their marriage lasted for nearly 50 years until his passing.

I have several friends who are big big Durbin fans.  I've not seen too many of her films but the few I've seen she is charming and did have a beautiful voice.  She was pretty, vivacious and her films saved Universal Pictures from bankruptcy.  The street set used in many of her films (like MGM's Carvel Street for the Andy Hardy series) still stands on the Universal lot.  It's still a working set most recently as Wisteria Lane in the tv series Desperate Housewives.

Durbin still has many devoted fans to this day.  You can find many websites and forums dedicated to her, including www.deannadurbindevotees.com.

Durbin is quoted in the New York Times obituary and I guess I'll leave it to her to have the last word:

“I was a typical 13-year-old American girl. The character I was forced into had little or nothing in common with myself — or with other youth of my generation, for that matter. I could never believe that my contemporaries were my fans. They may have been impressed with my ‘success.’ but my fans were the parents, many of whom could not cope with their own youngsters. They sort of adopted me as their ‘perfect’ daughter.”


In the letter, which was excerpted in some newspapers, she also wrote: “I was never happy making pictures. I’ve gained weight. I do my own shopping, bring up my two children and sing an hour every day.”

It's nice to know that singing continued to give her pleasure throughout her life.  She's one of the exceptions to the typical Hollywood child actor tragedies.  She lived a long and happy life away from Hollywood.  It seems she was a wise young woman who knew what real happiness would satisfy her and how nice that she found it.

Here she is with her one time rival at MGM, Judy Garland, from the 1936 film Every Sunday.  One might say this was MGM's test to see which vocalist to contract.  Depending on how you look at it, Garland both won and lost and in the end, Durbin also won.

DorianTB said…
Farewell to Deanna Durbin, whose lovely voice and endearing flair for comedy will always in our hearts! I've always enjoyed her Christmas-based comedy-thriller LADY ON A TRAIN.
May 1, 2013 at 11:08 AM