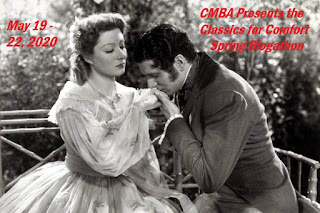 This post is part of the Classic Movie Blog Association's Classics for Comfort Spring Blogathon from May 19-22, 2020. First off, make sure you visit the CMBA website for links to all the other blog posts, it is going to be an EPIC list of movies.
If you are reading this, I hope you are safe, your family is safe and you are sheltering in place and wearing a mask when you go out. Be safe, stay healthy!

As CMBA set out in their invitation to the members, "There are so many terrific classic films out there that soothe and comfort us. Whether it's a dreamy musical number, a breezy, fun plot, or simply some delightful movie magic, there's something for everyone to enjoy in the world of classic cinema that can be comforting. With this blogathon, we're asking that you generate a "Top 5" list of some of your favorite classic comfort movies. By the end of the blogathon, we'll have quite a wonderful list of comfort movie recommendations to enjoy!"

I did a post yesterday and am cheating with a second post. I could hardly limit my comfort films to only 5.  I Could do a post of 50 and that would still be a short list. Regardless, here are another 5 films that are pure comfort for me.

I cannot count how many times I have watched this film. It was a staple on television growing up. The first time I saw it on the big screen, it was a newly struck IB 35mm print and my mouth gaped open for the first 10 minutes as I had never seen true Technicolor before this. It was astonishing.

This film has everything your could desire, adventure, action, romance, chivalry all in glorious Technicolor. Vastly entertaining the film flies by. Directed by Michael Curtiz and William Keighley this film stars Errol Flynn, Olivia de Havilland, Basil Rathbone, Claude Rains and there is hardly a more perfect film that will take you out of today and into a wonderful world. There is nothing better.

This may be, arguably, the quintessential "woman's picture." Starring Bette Davis, Paul Henreid and Claude Rains directed by Irving Rapper you are swept along the emotional journey of repressed Charlotte Vale who blossoms under the eye of a caring physician (Claude Rains) and with forbidden love awakened by Jerry Durance (a most romantic Paul Henreid). Underscored by the music of Max Steiner, I do not know a single woman who cannot identify with Charlotte Vale in some fashion. The fashion of Orry-Kelly is also a huge draw. The instant Charlotte Vale steps on the gangplank, a woman transformed you will never forget it. Truly a wonderful film.

Others may well argue with me, but, this is the most entertaining version of the Dashiell Hammett novel. I have a fondness for this film for many reasons, it is set in my hometown, for starters. The script is written with great economy and great wit by John Huston in his directorial debut. The casting, well, how can it be more perfect? Bogart in a true star turn as Samuel Spade, Mary Astor as the wicked Brigid O'Shaughnessy, Peter Lorre as Joel Cairo, Lee Patrick as Effie Perrine, and in his film debut Sydney Greenstreet as Caspar Gutman. The film is a precursor to post WWII Film Noir and 1000% pure entertainment.

Seventy-Eight years later, Casablanca can make you feel patriotic and become one who is ready to join the fight long after the last gun was laid down in 1945 at the end of WWII. Another film directed by Michael Curtiz that is filled with action, humor and aching romance. You might not think Humphrey Bogart would be so soulful and damaged as a leading man, hidden waters running very deep here. The sheer drop dead beauty of Ilsa Lund (Ingrid Bergman), the stalwart hero of resistance fighter Victor Lazlo (Paul Henreid) the savoir faire of Captain Reneault (Claude Raines) whose loyalty blows with the prevailing wind, and the evil of Major Strasser (Conrad Veidt), plus a cast of smaller parts that fill out this rich tapestry of a corner of Casablanca at the height of the war. Patriotism, love, war, hate all woven together under Curtiz's sure hand. Having seen this as many times as each of the above films, it is pure comfort.

From the instant the credits roll on this you can feel the oppressive, steamy heat of the Malaysian jungle and rubber plantations. Languidly the camera travels in the night until you are assaulted by a gunshot, and another, and still another and you see Leslie Crosby fire until she empties the gun in a nameless victim. So begins a tale that is gripping, another story of love, hate and revenge. Masterfully directed by William Wyler and ably assisted by the masterful camerawork of veteran Tony Gaudio, this is a lush film of light and shadow. You can just feel the humidity. It is quite simply a fantastic film. Gale Sondergaard practically steals the film scarcely uttering a word.

You might have noticed each of these films was produced by Warner Brothers. It is my favorite studio and these are just a few of my favorite classics. If I could sneak in just one more, it would have to be Footlight Parade from 1933.

FlickChick said…
I'm a Warners girl, too - all the way. You've picked some of the very best. Surely adventure, Depression cuties, intrigue and ill-fated romance (not to mention murder) can be comforting if it takes us out of our own world for a few hours. The magic of movies, right?
May 21, 2020 at 5:36 AM

carygrantwonteatyou.com said…
I love all of these choices. You're so right that we can all relate to Charlotte Vale in some way--that horrid outfit at the start of the film just screams "middle school fashion choices" to me.
May 24, 2020 at 4:44 PM 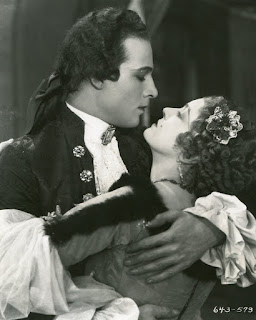