For the Love of Film (Noir) - Dark Passage 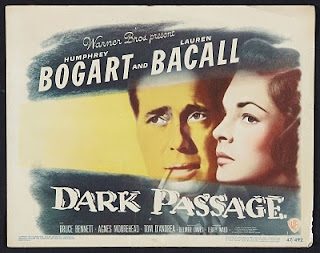 I'm incredibly fortunate to live in San Francisco and I love movies that are set and filmed in my hometown. Like other dark cities in which so many film noir are set, New York, Chicago and Los Angeles; San Francisco in black and white lends itself to film noir beautifully. Filled with back alleys, dark passages, deep shadows and then the fog all lend an aura of mystery and suspense to the San Francisco noir films. Dark Passage is one of my favorite films with some beautiful location shooting in and north of the city. 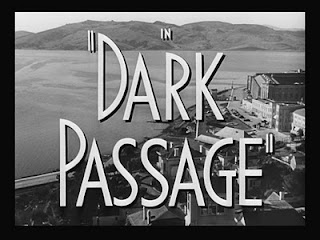 Dark Passage is also unique in that the first third of the film, we do not see the protagonist at all. We view the film from his vantage point. Similar to, and as troublesome as 1947's Lady in the Lake, the gimmickery of the camera perspective does not always work. It fares less well in Lady in the Lake since I find the effect annoying. In Dark Passage it is more engaging, drawing you in rather than continually taking you out of the film, at least it is to me. The plot is somewhat convoluted and a better recap than mine can be found here. 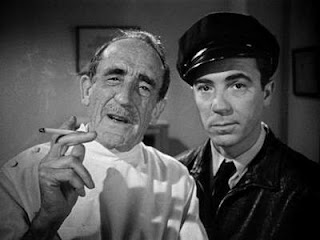 By 1947, Dark Passage is an atypical Bogart role since he’s not really a tough guy nor is he a gumshoe. Bogart’s Vincent Parry is an innocent victim, perhaps not a perfect man, but as we learn early on, he is not a murderer. He seems somewhat weak and is certainly desperate as he escapes from San Quentin Prison. He’s dependent on the kindness of strangers and gets a remarkable amount of help for a guy on the lam from the law. Our first glimpse of Parry is, in reality, a doctored photo of the director Delmer Daves. 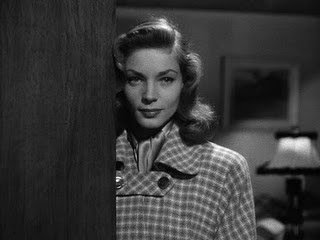 Bacall’s Irene is also atypical, not as sharp her previous roles. She’s given a softer edge and is a woman of some means. Not a tough one, at least not on the outside. She's warm, welcoming and speaks with a soft voice. Here is the face of a woman in love, can you blame him? 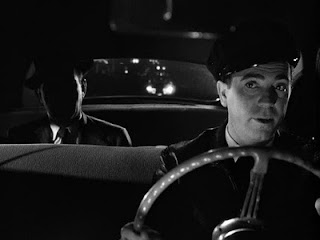 Bogart comes on the scene in shadow in the back of Sam's cab. Soon, he will have a "new" face and not surprisingly, it's the face of Bogart. Heavily bandaged and groggy from the anesthetic, but it is Bogart. Parry returns to the apartment of his friend George, a musician, only to find him dead on the floor with his crumpled horn as the murder weapon. Parry, naturally, picks it up and his fingerprints are all over it. 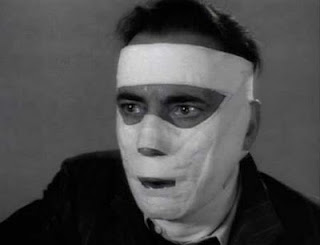 Knowing he can't stay there, he makes the lonely and long climb up Telegraph Hill to Irene's art deco apartment building at 1360 Montgomery (still standing). Collapsing in the doorway ringing the buzzer, Irene rescues him for a second time and nurses him back to health. He learns that he is now wanted for George's murder and assures Irene that he is innocent.

Irene's old flame Bob (Bruce Bennett) and acquaintance Madge Rapf (Agnes Moorhead) pay an inopportune visit. Madge is panicked as she was the witness who testified against Vincent Parry and is convinced he is out to take his revenge upon her. Irene manages to get rid of the pair.

7 days pass and at long last, Parry and his new face are revealed. He's healthy enough to make his departure again from Irene's doorstep. He's determined to find the murderer and has no idea he's being followed. He's determined to keep Irene out of harm's way and they part. 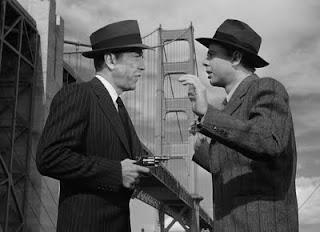 Parry checks into a hotel and finds his nemesis is the cheap blackmailer, Baker, who first picked him up in Marin after he escaped from San Quentin. Demanding money, and knowing Irene has it, Baker loads Parry into his jalopey to go shakedown some funds. Parry stalls Baker as they drive around the city and end up at the base of the Golden Gate Bridge. Parry snatches Baker's pistol and in the struggle, Baker falls to his death. Parry's luck is not holding out too well and the body count attributed to him is rising. It is clear to Parry based on Baker's comments that the real criminal is Madge Rapf and he sets out to see her. 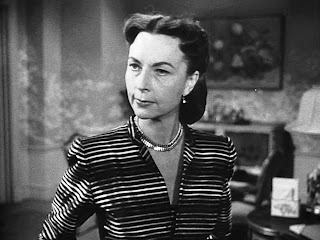 Madge fancies herself a woman that is desired and is also always looking for a new bit of fun. That's how Parry comes to the door, armed with chocolates and charm and saying Bob sent him. Madge turns on the charm but it does not take long for her to relaize this guy is no stranger, she does not recognize the face, but the eyes are familiar. Realizing at last that Vincent Parry has come to call, in her twisted manner, Madge falls/jumps through the window of her apartment further implicating Parry for her murder as well. Moorhead steals the picture at this point, her harried, fearful manner is so reminiscent of her Mrs. Henry Stevenson in the radio play Sorry Wrong Number. Her fall from the Hyde Street apartment is a shock and Parry escapes (unbelievably) via the fire escape and just walks away. 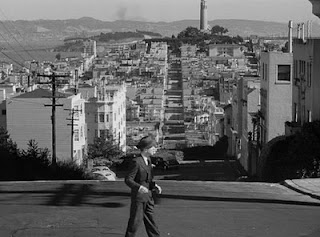 Parry decides now it's far too hot for him in San Francisco and calls Irene and tells her, he's off to South America, to Peru. If she can make it when things cool down, he'll be there waiting. Dissolve to a nightclub with latin rhythms and we see Irene sashaying as only Bacall can do, to the waiting Parry and a presumed happily ever after. The club looks a bit like Rick's from Casablanca.
It's a strange noir entry, the plot is really no more convoluted than the unfathomable The Big Sleep. It's somewhat dreamlike as the later Vertigo would be. I love this film for the location filming, the cable cars, the climb up to Coit Tower (and believe me it's not an easy climb, but worth it) and the Golden Gate Bridge. For me it's almost a love letter to the city I love. Yes, filled with dark passages, dark corners and shadows of Dashiell Hammett, it does not take too much hard looking to find that in Fog City Bogart and Bacall are still here.

Please do your bit and donate $5, $10, $15 or $20 to support the Film Noir Foundation. Even in these economically challenging times a few dimes will save something we can't easily replace. We can't save every single precious frame of film noir, but we can try. I'm a glass half full person, please help!

Please make your donation to support film preservation and the make the gun molls of film noir happy by donating some much needed loot. The paypal link will make you eligible for some grand raffle prizes!

Ed Howard said…
Nice review of a very fun, stylish noir. I love the contrived first-person scenes during the opening, obviously just a clever way of keeping Bogart offscreen until the surgery, and they wind up creating this wonderful suspense about when that familiar face will finally appear. The plot is convoluted as hell, but Bogart and Bacall are charming as ever, and Moorehead nearly walks away with the film in her few scenes, embodying a really unhinged and memorable noir villain.
February 17, 2011 at 10:15 AM

Anonymous said…
I saw this film for the first time last fall and it blew me away. quite possibly my favorite of the Bogie and Bacall noirs.
February 17, 2011 at 2:25 PM

Tinky said…
I like your analysis; and I now realize that althought I THOUGHT I had seen this film I have not! Time for a little research..... I'm a sucker for B&B, and I like Agnes Moorehead, too.
February 18, 2011 at 5:09 PM 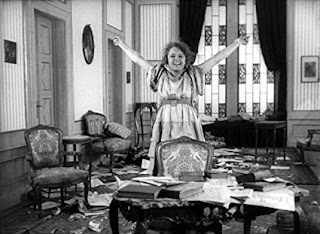 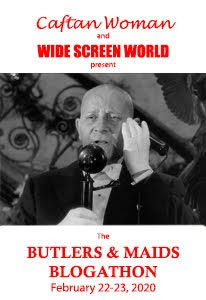